Skip to content
BELBIN Theory of TEAM
Being HR

Belbin Theory of Team Belbin’s 1981 book Management Teamspresented conclusions from his work studying how members of teams interacted during business games run at Henley Management College. Amongst his key conclusions was the proposition […] 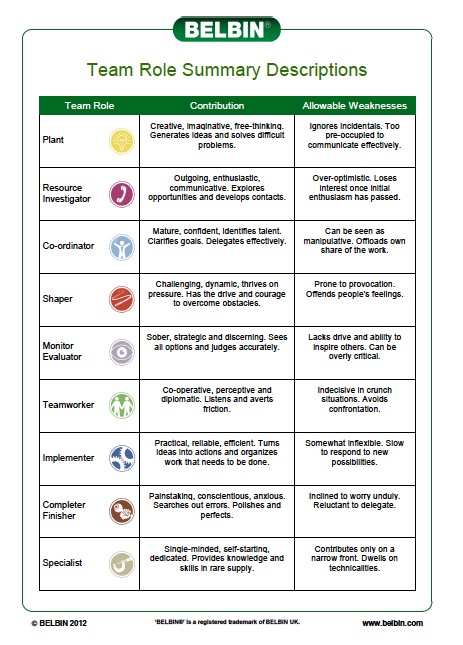 Belbin’s 1981 book Management Teamspresented conclusions from his work studying how members of teams interacted during business games run at Henley Management College. Amongst his key conclusions was the proposition that an effective team has members that cover eight (later nine) key roles in managing the team and how it carries out its work. This may be separate from the role each team member has in carrying out the work of the team.

Plant: A creative, imaginative, unorthodox team-member who solves difficult problems. Although they sometimes situate themselves far from the other team members, they always come back to present their brilliant idea.

Chairman (1981) / Co-ordinator (1988): The “Chairman/Co-ordinator” ensures that all members of the team are able to contribute to discussions and decisions of the team. Their concern is for fairness and equity among team members. Those who want to make decisions quickly, or unilaterally, may feel frustrated by their insistence on consulting with all members, but this can often improve the quality of decisions made by the team. Clarifies goals; helps allocate roles, responsibilities, and duties; articulates group conclusions

Shaper: A dynamic team-member who loves a challenge and thrives on pressure. This member possesses the drive and courage required to overcome obstacles. Seeks patterns in group work; pushes group toward agreement and decisions; challenges others

Monitor-Evaluator: A sober, strategic and discerning member, who tries to see all options and judge accurately. This member contributes a measured and dispassionate analysis and, through objectivity, stops the team committing itself to a misguided task. Analyzes problems and complex issues; monitors progress and prevents mistakes; assesses the contributions of others; sees all options; judges accurately

Team Worker: The “Team Worker” is concerned to ensure that interpersonal relationships within the team are maintained. They are sensitive to atmospheres and may be the first to approach another team member who feels slighted, excluded or otherwise attacked but has not expressed their discomfort. The Team Worker’s concern with people factors can frustrate those who are keen to move quickly, but their skills ensure long-term cohesion within the team. Gives personal support and help to others; socially oriented and sensitive to others; resolves conflicts; calms the waters; serves as an in-group diplomat

CompanyWorker (1981) / Implementer(1988): The “Implementer” is the practical thinker who can create systems and processes that will produce what the team wants. Taking a problem and working out how it can be practically addressed is their strength. Being strongly rooted in the real world, they may frustrate other team members by their perceived lack of enthusiasm for inspiring visions and radical thinking, but their ability to turn those radical ideas into workable solutions is important.Completer Finisher: The “Completer Finisher” is the detail person within the team. They have a great eye for spotting flaws and gaps and for knowing exactly where the team is in relation to its schedule. Team members who have less preference for detail work may be frustrated by their analytical and meticulous approach, but the work of the Completer Finisher ensures the quality and timeliness of the output of the team. Emphasizes the need for meeting schedules, deadlines, and completing tasks; searches out errorsSpecialist (1988): Belbin later added a ninth role, the “Specialist”, who brings ‘specialist’ knowledge to the team. Single-minded, self-starting, dedicated; provides unique or rare expertise and skills

Based on Belbin’s model of nine team roles, managers or organisations building working teams would be advised to ensure that each of the roles can be performed by a team member. Some roles are compatible and can be more easily fulfilled by the same person; some are less compatible and are likely to be done well by people with different behavioural clusters. This means that a team need not be as many as nine people, but perhaps should be at least three or four. While comparisons can be drawn between Belbin’s behavioural team roles and personality types, the roles represent tasks and functions in the self-management of the team’s activities. Tests exist to identify ideal team roles, but this does not preclude an extravert from being a Completer Finisher, nor an introvert from being a Resource Investigator.

Posted on June 2, 2016 0 By sourcingspider Being HR Posted in Being HR

Connect us on Social Platforms