​Demarcation Dispute is non-agreement between trade unions under same employer on the work that will be completed by members of their trade union.  In multi union set up demarcation for […]

​Demarcation Dispute is non-agreement between trade unions under same employer on the work that will be completed by members of their trade union. 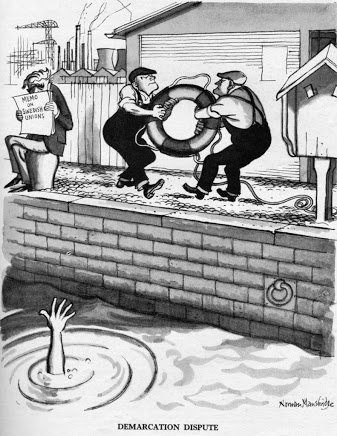 In multi union set up demarcation for the responsibilities of member of particular union become point of dispute.

In a country where only one union is allowed to be recognised union then such dispute come to membership level also. In order to secure maximum membership, unions pull members by claiming work that they will get from management will not be difficult as compared work that would be asked to other union members.

Following may be reasons for such dispute

In the plant setup, some of the task require less time to complete. Also many times there is time lag between point when one completes the task and new task arrives at the his desk. This is due to inherent nature of the job.

-Dependency on other sections/person to complete work

By design certain task become much easier than others in series of tasks. Then these become source of dispute to man these task with particular union member.

All such issue become problem for the employer to solve as there are multiple demand for the same task. Also these issue take away productive time in negotiating.

As there is hardly any dispute resolution mechanism to solve dispute between two or more unions, such dispute needs to be solved by mutual discussions. Hence all such dispute need to be handled with mutual understanding which becomes problem for employer to solve.