According to Holland Vocational Preferences, people make career decisions by projecting self and worldly views of work over occupational titles.

John Holland developed the ‘theory of vocational choice’ which is widely accepted all over the world for career development. This theory postulates that the higher the degree of similarity between individual’s personality characteristics and occupational characteristics, higher is the probability of achievement of positive career outcomes like job satisfaction, promotion and achievement.

There are basic assumptions that form the basis of this theory.

1. Most people can be classified into 6 personality types: Realistic, Investigative, Artistic, Social, Enterprising or Conventional, which are summarised as RIASEC types.

2. People prefer to work in such environments which allow them to express their attitude, abilities and skills freely.

3. Individual behaviour is an outcome of his personality interacting with the environment and the characteristics of the surroundings. These outcomes can be personal competence, social behaviour, and educational behaviour and job changes.

4. Holland’s hexagonal model is to determine the congruence between a person and his occupation. A shorter distance between personality and occupation types signifies a close relationship.👇 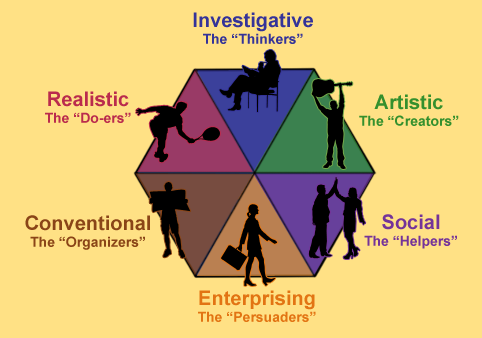 5. This model also defines degree of consistency which a person or an environment possesses. The adjacent personality types on the hexagon are generally more compatible and have similar dispositions or job responsibilities. Opposite vertices on the hexagon indicate complementary or inconsistent personalities, and job functions which bear no correlation.

6. Some people or environments might be dominated heavily by one characteristic and hence are more clearly defined than others. On the other hand, if a persona bears similarity to several types, it is poorly defined or considered undifferentiated.

As per Holland, the RIASEC ( Refer the above image 👆) job environments are characterised as:

2. Investigative: Explorative, analytical and with a scientific bent of mind

Posted on May 8, 2017 0 By sourcingspider Being HR Posted in Being HR, HR Word of The Day