A golden parachute is an agreement between a company and an employee (usually a high level executive) that provides significant financial benefits to the employee upon termination. 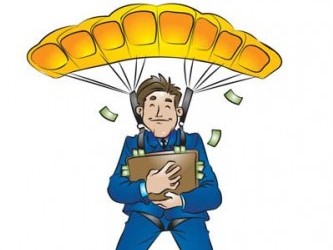 . Golden parachutes are usually reserved by the enterprise for the top level management executive of the organization.

The benefits package mostly consists of a list of specific terms that tells us what the terminated employee will get.

Golden parachute works in way when an employee is offered a top level executive position in the firm, the contract will usually include a golden parachute clause. The clause clearly states the amount of the severance pay, cash bonuses and stock options that he would get. It is also mentioned the condition under which a golden parachute is applicable.

The term golden parachute might seem like more towards in employee’s favor like termination is good news. While golden parachutes have benefited the individuals and organizations, but they have also created various controversies.

1. Reward the Risk takers- Executives are nervous about the fact that any wrong decision might result in losing their current jobs, so it provides cover for such issues. Management needs leaders who are bold enough to take risks and succeed.

3. Finding executives become easy- The golden parachute is one of the unique selling points in attracting applicants for high level job vacancies. Executives need some kind of security if they are looking to work in an enterprise which has high probability of being acquired by some other firm.

4. Facilitate more amicable severances- Usually when an employee is fired, some tend to retaliate by going against the employer by threatening them to sue or disclose sensitive information. Under this they would part ways without either party feeling anything bad against each other.

5. Removal of conflict- During a merger, an executive may willingly delay or sabotage the efforts as he might be afraid of losing his job. The golden parachute guarantees their compensation, so they may be objective about the evaluation of the merger.